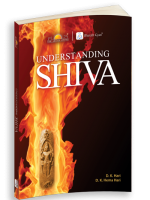 Shiva has many forms, many faces and many names. Who is Shiva?

This book is an effort at unraveling the layers of meaning of Shiva from a scientific and universal perspective.

It brings to light how Shiva is not a historical person but is the very essence of every particle in this Universe.

How Shiva is a Tattva, an underlying principle, that exists not only from the moment of Creation, but holds sway even before the creation of the Universe, when time stands still - the primordial force, potential, auspiciousness that exists in every component of the Universe, at every instant.

That is the real understanding of Shiva that this book brings forth and then goes on to explain how to understand each form of Shiva.